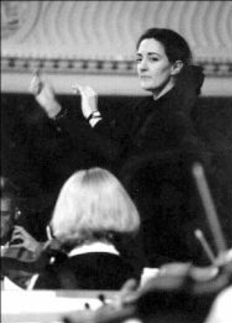 Isabel began taking piano lessons at the age of six with Maria Antonieta Lozano. From the start, her marked talent for music was matched by her interest.   When the time came for her to go to school, she quickly earned the regard and respect of her peers , and it was not long before she became an acknowledged leader in her class. Her academic career began at Universidad Intercontinental, where she studied philosophy. Simultaneously, she continued her exploration of music at the Centro de Investigación y Estudios Musicales (Center for Music Research and Study) where she took lessons in piano, violin, clarinet and oboe. She interrupted her studies in Mexico to spend the 1985-1986 academic year in Rome where she trained with Doménico Bartolucci, music director of the Sistine Chapel Choir. Her work in Rome earned her a baccalaureate degree in Gregorian Chant from the Pontifical Institute of Sacred Music.

Returning to Mexico, Isabel completed her philosophy degree and graduated with honors. Her thesis was titled “Leopoldo Zea en la Encrucijada de la Historia” (Leopoldo Zea at the Crossroads of History), a play on the title of one of the Mexican philosopher’s best known works.

Her music studies continued, as she launched herself into the intricacies of orchestra conducting with Xavier González at the Instituto Cardenal Miranda, while engaging in deepening her knowledge of piano at the Escuela Nacional de Música under Carlos Vásquez.

By 1988, she felt that she would best advance her music education by going to Austria, where she spent the following six years. The first year she attended the Hochschule für Musik in Vienna. In 1989 she was accepted by the Mozarteum in Salzburg. In Salzburg she confronted a deep-seated bias on the part of some professors against teaching women, particularly with regard to conducting. Through both unfailing good humor and a steely determination, she was able to overcome this bias, and blaze a trail for those who would come after her.

Her fourth and fifth years in Austria, she alternated between Vienna and Salzburg so she could take classes in orchestra conducting under Karl Österreicher. During her final year in Salzburg, her orchestra conducting teacher was Michael Gielen while Walter Hagen-Groll was her teacher for choral conducting.

The quality of her work and her determination led to her Master of Choral Conducting Degree from the Mozarteum in 1993. When designing her final exam concert, she included a piece sung in Nahuatl, the indigenous language of the Mexica (Aztec) people, from archives dating back to the early  Spanish colonial times.

In 1995, Isabel became the first woman in the world to receive the Master of Orchestra Conducting Degree from the Mozarteum. This significant event was reported as an item in the national television newscast “Heute Österreich”.  She was in her second year of a PhD in musicology at the Ludwig Maximilian University of Munich, delving into the music of Mexican composer Silvestre Revueltas for her doctoral thesis when she died in 2003.